Meriden, CT, July 25, 2018---Pennrose and The Cloud Company are pleased to announce the grand opening of Meriden Commons I and the official groundbreaking of Meriden Commons II in Meriden, Connecticut. The total project, delivered in two phases, is a transit-oriented development that will provide 151 mixed-income apartment units and more than 6,500 square feet of commercial and retail space. Developed in partnership with the City of Meriden, the Meriden Housing Authority (MHA) and Maynard Road Corporation (MRC), the project builds upon recent city efforts to revitalize downtown Meriden and make the area accessible via multi-modal transportation. 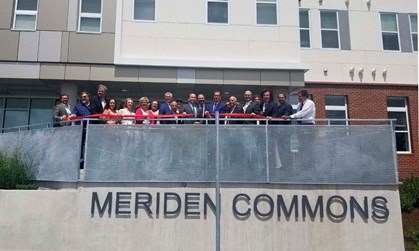 Meriden Commons I offers 75 brand new, mixed-income apartment homes ranging from one- to three-bedroom floorplans. Of those units, 60 are affordable and 15 are market-rate, and two affordable units designated for veteran households. Additionally, the building features 5,400 square feet of ground-floor commercial space.

Once completed in the fall of 2019, Meriden Commons II will provide 76 high-quality, mixed income apartment homes ranging from one- to four-bedroom floorplans. Meriden Commons II is comprised of three buildings, one midrise, elevator building with approximately 1,300 square feet of retail/commercial space, and two townhouse-style buildings. Sixty units will be designated as affordable housing and the remaining 16 units will be market-rate apartments.

“Pennrose is committed to improving the communities we serve,” said Charles Adams, Regional Vice President at Pennrose. “As a transit-oriented development, Meriden Commons connects high quality, mixed income housing to jobs and retail, boosting the economic vitality of downtown Meriden. These developments are just the next two pieces of a plan for transformation for this area envisioned and executed by the City of Meriden and the Meriden Housing Authority and funded and supported by the State of Connecticut. We are honored to be a part of this incredible transformative project.”

Both phases are designed to be energy efficient and the second phase will meet Passive House standards. Amenities include community rooms, fitness center, and playground. Located at 161 and 177 State Street, Meriden Commons I and II are across from Meriden Green and within close proximity to downtown Meriden and Meriden’s Amtrak Center.

Designed by the architecture and urban planning firm WRT and constructed by Haynes Construction Company, Meriden Commons I and II are part of a larger revitalization plan called Meriden 2020: A Comprehensive Plan for Downtown Meriden, which was awarded a $500,000 Choice Neighborhoods Planning Grant in 2013.

Financing for the Meriden Commons developments was secured from a mix of private investment, low-income housing tax credits, and $11.74 million from the State of Connecticut Department of Housing.